Get the Bad Batch before the Imperials

(In the form of Custom Minifigures)

“A test is in order. Four enhanced clones, more capable than an army. Yet, they exhibit a concerning level of disobedience and disregard for orders. I want Clone Force 99 found and wiped out,” said Imperial Admiral Tarkin, according to our local news source on Coruscant. The infamous Clone Force 99, also known as the Bad Batch, will debut on Disney Plus, a rebellious streaming service.

The 4th of May will be a new holiday across the whole galaxy as the adventures of a specialized clone warrior team, the Clone Force 99, will debut on the Holonet and Disney Plus. Hunter, the team’s leader, Tech, an excellent pilot and the nerd on the team, Wrecker, who’s a little too excited about blowing things up, and Crosshair – well, let’s just say you don’t want to be in his sights. The soldiers are part of a secret Imperial operation gone wrong, and end up being hunted by the evil forces of the soon-to-be Grand Moff Tarkin.


Collect all four of the original Bad Batch team, and drop them on the field to see their devastating abilities. No droid or Imperial Stormtrooper can resist their power.

The Bad Batch, featuring characters first seen in a 2016 episode of Clone Wars, is the latest Disney Plus release and follows a group of ex-clone troopers who take on new identities after the events of The Clone Wars. Rumor has it that the animated series will be both a spin-off and sequel to Clone Wars and will also feature popular characters such as Rex, the original Clone Trooper, and Fennec Shand, Boba Fett’s partner from The Mandalorian.


All four figures are all custom-made and look exactly like the cartoon characters. They match all the original LEGO pieces and were designed with love and care for Star Wars. There is currently no official release planned, so collecting the Bad Batch minifigures is a unique opportunity for Star Wars fans.


All custom minifigures are created by BlockMasters, a family-owned manufacturer of custom miniatures based on popular movies, animated films including Marvel and DC superheroes, video game characters, and celebrities such as Chuck Norris. All custom-built LEGO figures await you in our web store. Take a look at the figures and contact us if you have any questions.

May the 4th be with you all! 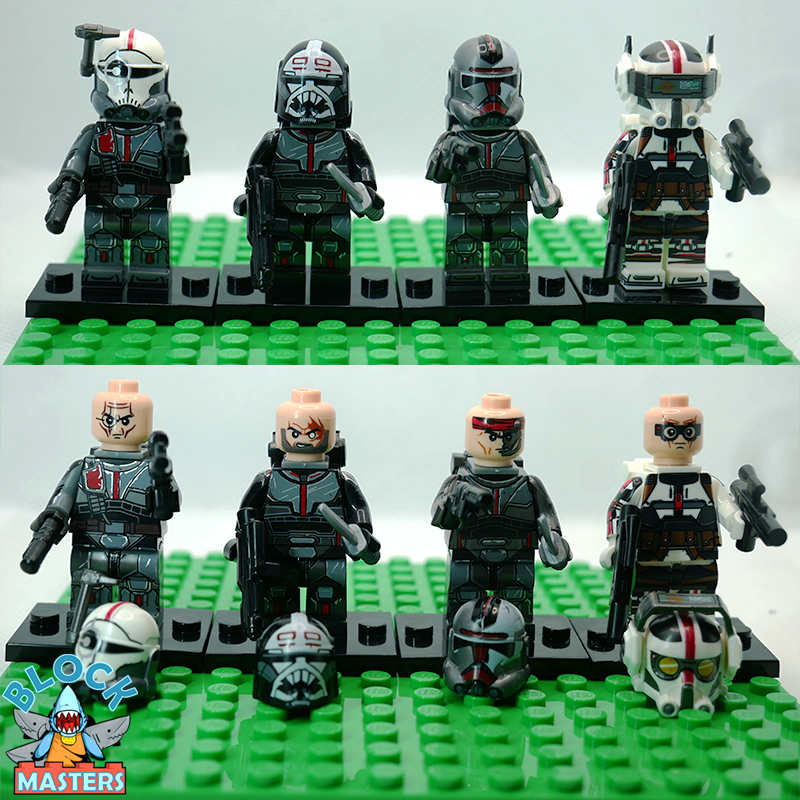 This is a special unit of Clones that get any job done. Each member has his own specialties

Comes with everything in the photos

Slight variations, blemishes, specks may appear on each mini-figure as is the nature of printing on these awkward shapes. These are NOT lego brand but a high quality look a like custom product.